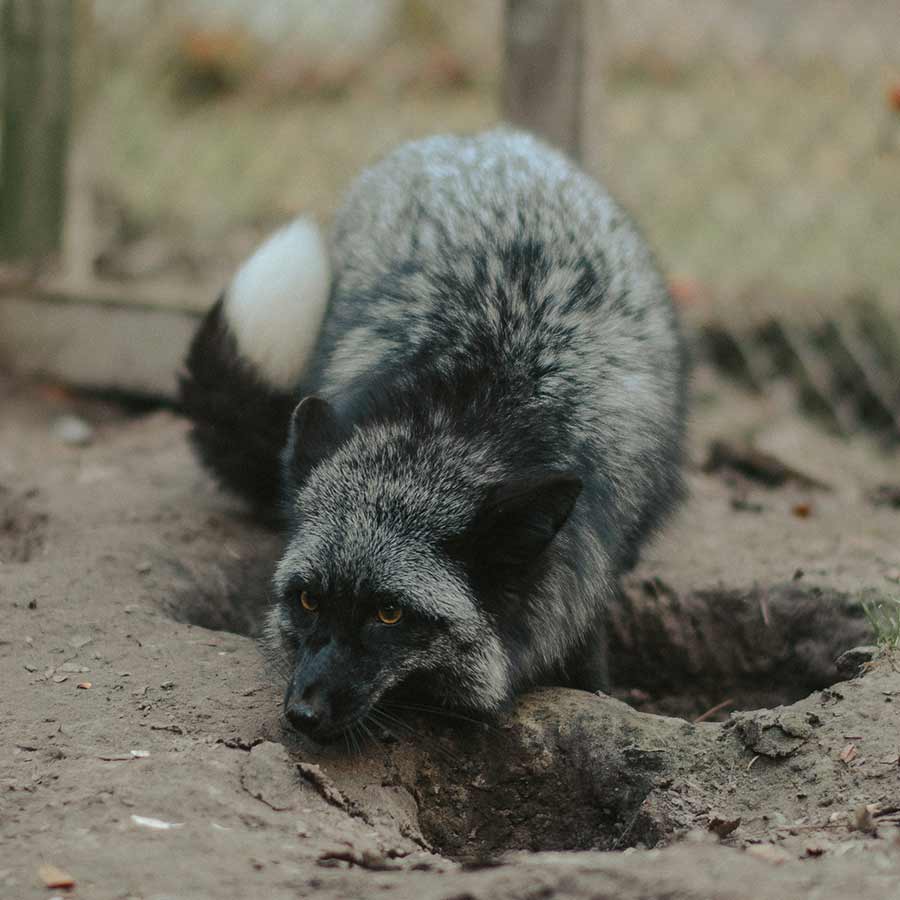 Tippy was approximately six months old when she arrived at Catty Shack Ranch on August 9, 2013. She had been a private pet who was dropped off at the entry of an exotic pet sanctuary in South Florida. They were unable to keep her and sought us out. We were honored to give Tippy a loving, permanent home.Tippy is a silver fox, the melanistic (black) gene of the red fox family. Silver foxes do exist in the wild but are bred in captivity for their fur and the exotic pet industry. Tippy is silver and charcoal gray with an exquisite plumed white-tipped tail (hence, her name). She too is especially beautiful in the winter when clad in her full, fluffy coat. Belonging to the canid family as opposed to the felid family, Tippy is considered one of our “honorary cats.”

Tippy arrived when we were hoping to find a friend to live with Chula, our other fox. New to the Ranch, Tippy received a veterinary examination and shots, was spayed and spent time in quarantine away from the other animal residents. Slowly, we introduced her to Chula – first through scented blankets and then physically in adjacent enclosures and for longer periods of time within a smaller fenced area inside the fox habitat. Tippy and Chula were able to sniff each other and play and chase with mesh protection. The foxes decided for themselves when this extra barrier was no longer needed. One morning when we were about ready to allow them to interact with no separation, we found they’d already dug a tunnel under the smaller enclosure and were happily playing together, enjoying all the tubes, tunnels and platforms in the larger area. This same interaction continues today as they chase and yip at each other and try to steal each other’s food and toys. A fox’s best form of exercise may be another fox! As with most animals, the girls are less active in the heat of the summer, preferring to rest on their platforms or remain in the cooler dirt of their burrows.

Tippy enjoys a healthy diet of raw meat, berries, and eggs portioned appropriately to her age, size, and nutritional needs. All our animals receive regular veterinary care and are very much loved.