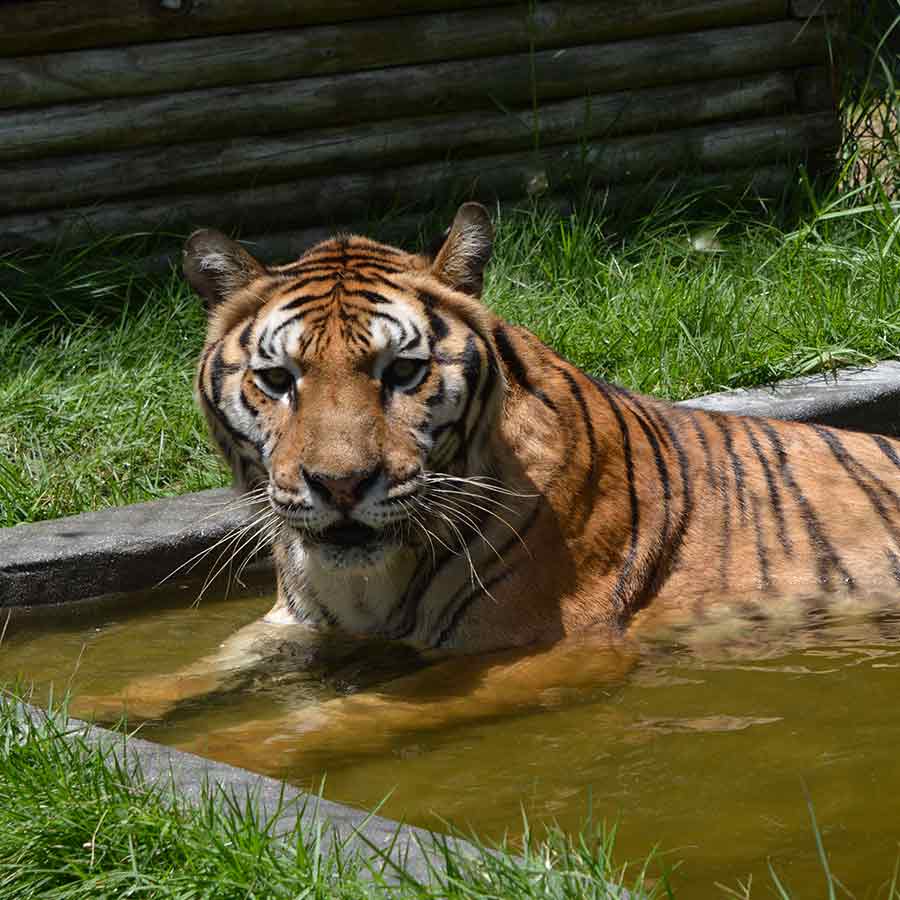 Terry arrived at Catty Shack Ranch from a private facility on April 11, 2001 when he was less than 2 weeks old. He was accompanied by his brother Lex (deceased in 2014). Their litter brother Binky came to the Ranch over a year later.

The cubs were named in honor of the radio personalities Lex and Terry whose broadcast originated locally then. When the cubs arrived, the Ranch was not open to the public and as now, received no outside funding. All donations supported the animals. The DJ’s featured Curt and their namesake cubs on their morning shows, giving us publicity and securing donations. Years later, when the cubs were grown and the radio show originated elsewhere, the DJ’s were in Jacksonville appearing at a benefit motorcycle ride. They were reintroduced to the handsome full grown tigers named for them.

For many years, Terry lived with Lex and Tamara, running, chasing, wrestling and splashing in their pool. They would frequently “box” with one another, standing on their hind legs and pawing at each other. However, all this activity made a hip defect apparent and to prevent further injury, Terry was moved to his own enclosure. Terry has been diagnosed with hip dysplasia – similar to the condition some dogs develop.

Terry received 3 stem cell treatments in hope that he’d benefit as do many of the afflicted dogs. His relief was temporary and his hips remain weak. He continues to get the best of veterinary care and receives Adequan injections for his joints. We are grateful to Capital Veterinary Specialists and Affiliated Veterinary Specialists for his care.

Terry’s loving volunteers continue to modify his habitat to accommodate his needs. He enjoys splashing with his boomer ball in his in-ground pool. His hammock is near ground level so he can easily take nap in the sun. He loves to roll on his sod covered ground. Despite his condition, Terry remains active and enjoys life. He easily moves his hammock across the enclosure; it takes 2 strong volunteers to put it back in place!

At Catty Shack Ranch, Terry enjoys a healthy diet of raw meat with vitamins and supplements appropriate to his species, age and current health conditions. All our animals receive regular veterinary care and are very much loved.