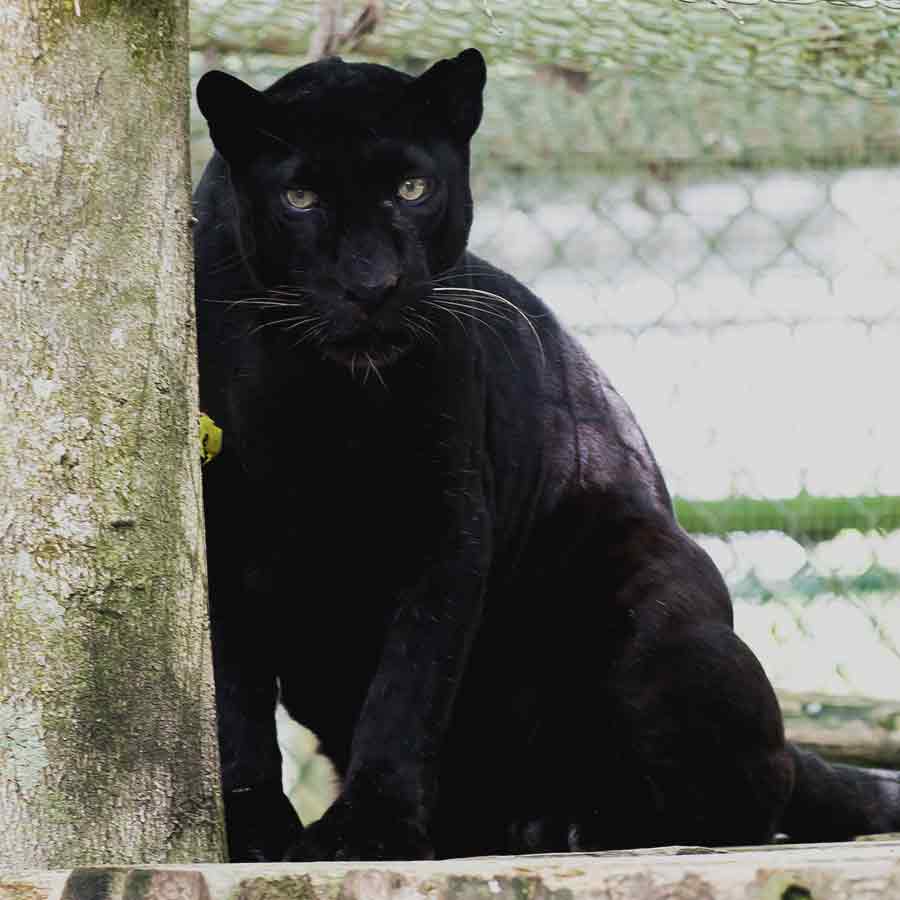 Skywalker arrived at Catty Shack Ranch on June 12, 2002. He was approximately 5 years old at the time. He was part of a group of animals confiscated by the USDA from a private zoo. He arrived with BJ (the love of his life, another black spotted leopard), Binky the tiger and Nyra the lioness.Skywalker is a black Asian leopard. In the right light, you can see his black spots (called rosettes) set on a black background. Skywalker’s melanistic (black) coloration is the result of a recessive gene. In some of the densely forested areas of Malaysia, some other locales in Southeast Asia and in an area near Mt. Kenya, Africa, the black leopard is more common than the light colored spotted leopard.

Watching Skywalker slink and stalk along his habitat, one can imagine a leopard stealthily hunting in a forest. Perched on his platforms and branches, he reminds us that leopards are adept climbers and spend much time resting high up in trees. In the wild, he’d easily carry his prey up to that resting spot – even when his kill is 2 or 3 times larger than he is!

Skywalker shows some interest in enrichment activities – he may rub against or chew on a Christmas tree branch or bat at a small pumpkin. He would much rather seek and find a tasty meat snack in a tube, box or paper bag. If he needs any enticement or reward for moving from his lockdown back into his habitat, he insists on a big piece of chicken. He is very much a “lady’s man,” soaking up attention from female volunteers and visitors. Although he rarely makes noise, he can occasionally be caught directing sweet sounds to his favorite female caregivers.

At Catty Shack Ranch, Skywalker enjoys a healthy diet of raw meat with vitamins and supplements appropriate to his species, age, and current health conditions. All our animals receive regular veterinary care and are very much loved.