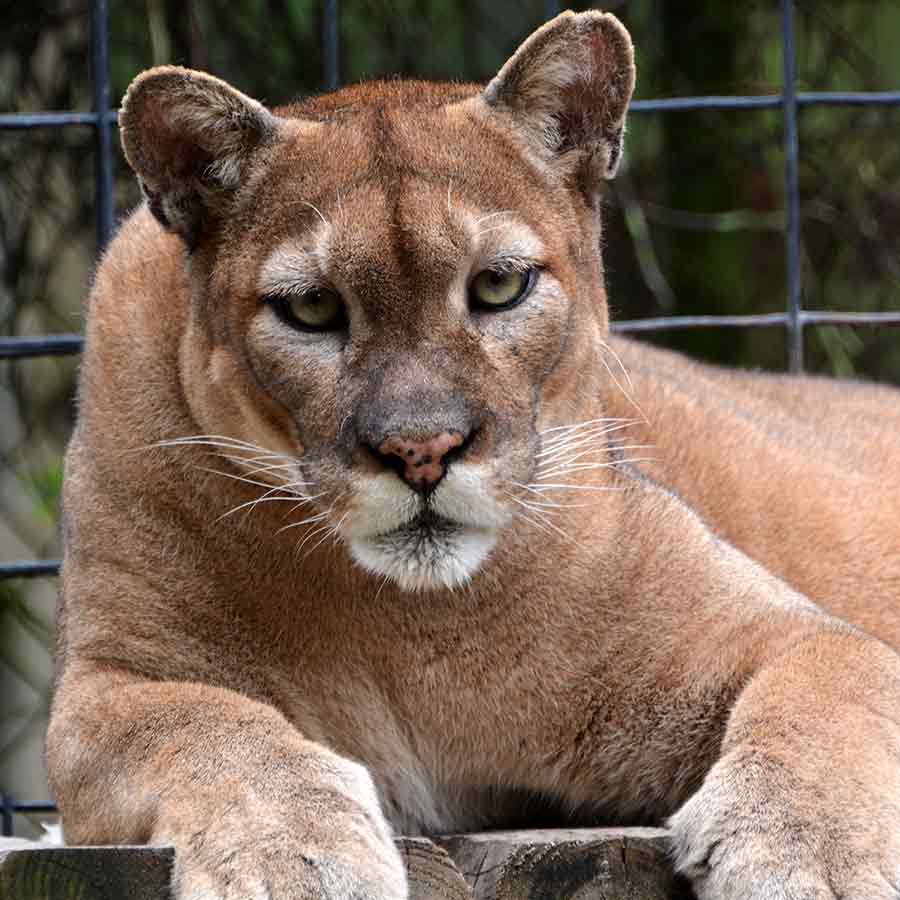 No Tail and Long Tail arrived at Catty Shack Ranch on January 19, 2001. The Florida Fish and Wildlife Commission confiscated them both from a private owner. They are not siblings and veterinarians suspected they were about a year old at the time.Although we were not definitively told that No Tail is of the Florida panther subspecies (Puma concolor coryi), her appearance is very similar to Long Tail’s (who is considered to be a Florida panther). Compared with our other pumas, they are smaller and darker and their face shape is different. The size and coloration difference reflects their prey and habitat in the wild. Florida panthers’ largest prey is a Key deer – much smaller than the elk or moose that may be hunted by pumas out west. Florida panthers’ native habitat is warmer and more humid, leading to a darker coat color.

The puma’s native range spans from British Columbia to Argentina. Across this far-reaching territory, the cats are referenced by many names – puma, panther, cougar, mountain lion, catamount, painter and more. The name you give this animal often reflects where you or your family come from. – change to facts specific to Florida panther.

One characteristic everyone notices (and most certainly is the source of her name) is No Tail’s lack of … a tail! We’ve been told it was docked at an early age, probably due to sores suffered as a kitten. Mother cats lick their cubs or kittens to stimulate their waste elimination. No Tail may have developed wounds that wouldn’t heal. In the wild, a puma relies on its tail for balance and as a rudder for “steering” when jumping from high trees to land on its prey. No Tail’s balance and coordination adapted very well. Her dinner is served on a platform and she agilely leaps up to enjoy each meal.

No Tail and Long Tail are more elusive than our other pumas, often resting in their den boxes until close to dusk (and feeding time!). They tolerate each other’s company, often times choosing to share the same den. Like most wild animals, that tolerance disappears at dinner time, each cat making her meal quickly vanish.

No Tail enjoys a healthy diet of raw meat with vitamins and supplements appropriate to her species, age, and current health condition. All our animals receive regular veterinary care and are very much loved.