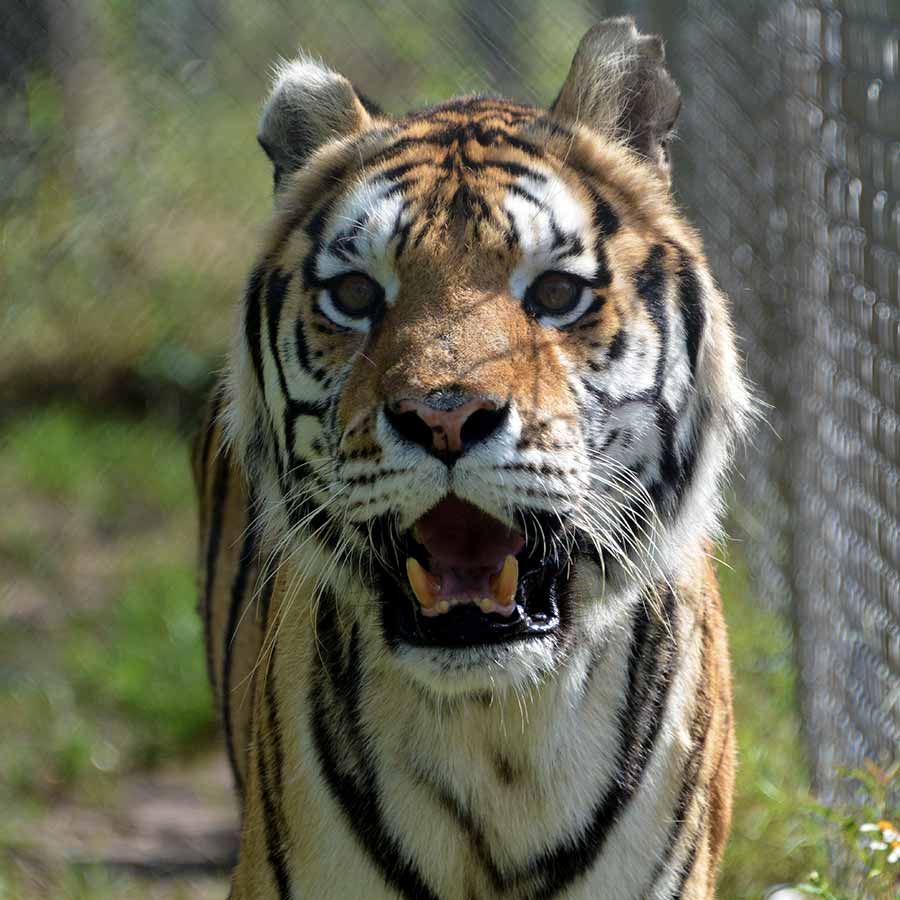 Our dear, sweet Binky, oh how we miss you! Catty Shack Ranch is heartbroken to announce the loss of another of our residents. Binky the tiger passed away on August 27, 2017. He celebrated his 16th birthday on March 31, 2017 and
had been a happy resident of the Ranch since June 2002.

In the last few months of his life, Binky’s mobility declined. Like a stroke victim, his back legs weren’t receiving or responding to the signals his brain sent to stand or walk or climb. He ate well, he chuffed greetings to his volunteers and tried to engage in his usual activities. We all hoped that something could be done to restore our special Binky. He was treated by experts at Affiliated Veterinary Specialists and at the University of Florida.

We moved him closer to the medical building into an enclosure with an elevated, soft artificial
turf covered floor to keep him clean and dry. One of his special volunteer friends, George S.
constructed a deep, long therapy pool in his old habitat. We hoped that therapeutic swimming
might strengthen his hind quarters as such activity has benefited pets, humans and a (now
deceased) tiger who previously lived at the Ranch. Until he became unable to climb into his
pool, Binky very much enjoyed swimming and splashing. We knew he would absolutely love his
new pool. Sadly, it was just completed when Binky let us know that his time to leave us had
come. It is never an easy decision to euthanize any of our animals.

Binky brought smiles to so many visitors and volunteers. No one could be sad or troubled after
meeting or spending time with him. His joie de vivre was contagious. Binky’s name, his
personality and his antics all made us happy. He loved splashing and playing in his pool and
shredding (and drowning) pumpkins and cardboard enrichment toys. Even recognizing that he
was a wild animal, his face could be described as “cute.” He wore an innocent quizzical
expression, as if he were thinking and about to share his deepest thoughts with you or ask you
a serious question. He ran and played and thoroughly enjoyed life. Many volunteers started
their work day by greeting Binky first. He basked in all the attention he received. Binky was a
happy goof-ball of a tiger!

For many years, he lived with Topaz, our golden tabby tiger (now deceased). When Sarah the
tiger moved next door, he was interested in her too. Although they arrived at the Ranch at
different times and did not live together, Binky was a brother to Terry and Lex (now deceased).
Binky, we were privileged to have cared for you for so much of your life. We are grateful that
you now rest in peace, no longer troubled and unable to engage in the activities you so loved.
Now you can run, chase, swim and splash forever, sweet boy. Your special pool will be enjoyed
by other tigers but to us, the volunteers who so dearly love you, it will always be “Binky’s Pool.”

Binky, we love you and miss you so very much. You truly are special.