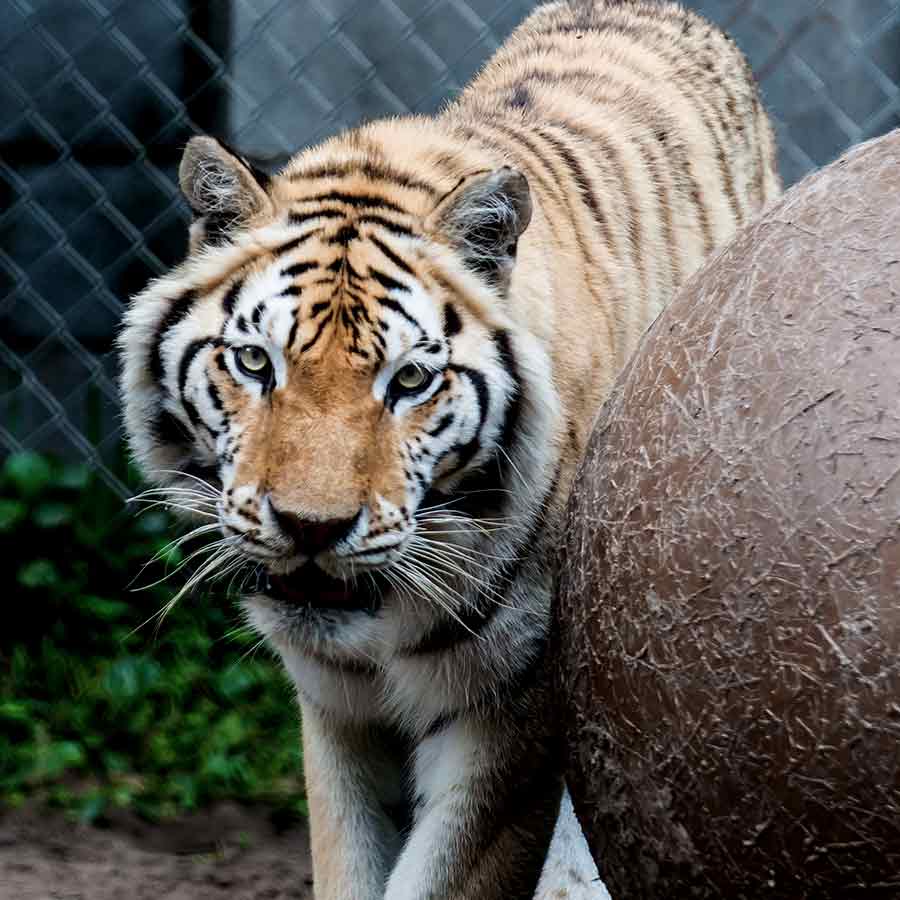 Athena and her siblings Aphrodite and Hercules were born at Catty Shack Ranch on September 10, 2002. Their parents, Zeus and Topaz, were great crowd favorites and have since passed away. The litter proudly bears the names of Greek gods and goddesses. Athena was the goddess of wisdom, war, art and literature. In mythology, Athena’s father was also Zeus (the god, not our tiger!).

Our Athena is one of the smallest of our adult tigers. She weighs 300 pounds or less, being half the size of some of our “big boys.” Despite her diminutive size, there is a reason she lives alone now. She is a true warrior (princess). She originally lived with Hercules and Aphrodite but played too rough. An animal with a tiger’s strength, claws and jaws can inflict much damage, even when playing. Now all are happy and safe – she lives next to Hercules and Aphrodite.

Athena delights in showing off for her visitors at the Ranch. Many times, she will come up to the front of her enclosure when called. She happily chuffs in response to any of the visitors’ or volunteers’ comments. Being a typical cat, however, she may choose to ignore the invitation, pretend that she doesn’t hear you or has temporarily changed her name. She rolls over and shows the world that, yes, tigers do have striped tummies. If she were a mere house cat and not a tiger, it would be natural to rub that fluffy belly. Do not think about doing this to a tiger!

As a predator, she sometimes stalks visitors and volunteers and pounces as wheeled vehicles (strollers, wheelchairs, trolleys and golf carts) pass by. As her food is delivered in a gator, in her mind, this behavior gets rewarded, at least at feeding time.

At Catty Shack Ranch, Athena enjoys a healthy diet of raw meat with vitamins and supplements appropriate to her species, age and current health conditions. All our animals receive regular veterinary care and are very much loved.