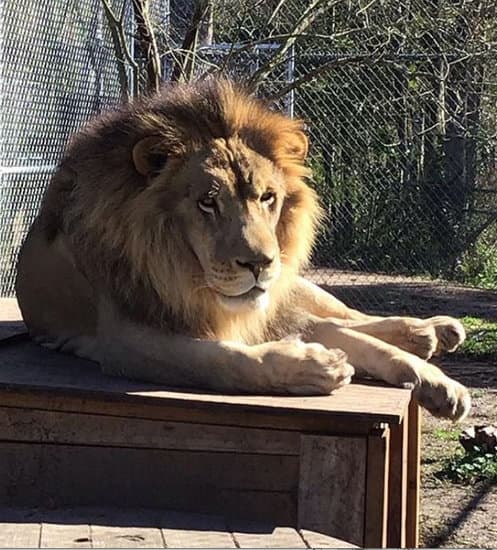 When Abu first came to Catty Shack in November 2019, we were told the 7 ½-year-old African lion was a bit mischievous and didn’t play well with others. But like most kids who act out, he just needed some extra attention and lots of love, and Abu found plenty of that here at the Ranch.

All of Jacksonville couldn’t get enough of him through social media posts, television announcements and packed park visits pre-Coronavirus. His mane was the main attraction. And it attracted a certain lioness, too.

Abu took his place in the habitat next to Nyra. Although three times his age, Abu immediately warmed up to Nyra and Nyra just as quickly let him know who’s boss. It didn’t take long before handlers took down the fence that separated them and they’ve been together ever since.

Now when it comes to the human persuasion, Abu loves all human kind, but he has a special place in his heart for Evin LoGiudice, our executive director’s son. Before the night feedings, be sure to get over to Abu’s habitat to see the excitement of the two brothers greeting each other. The lion runs and hops and roars while Evin… sort of does the human version of that.